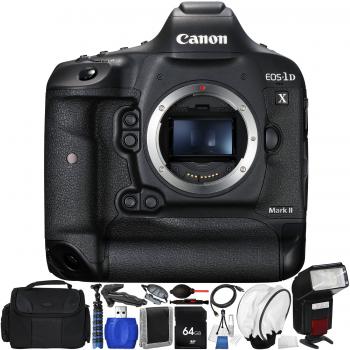 Bringing the shooting speed and video capabilities required by professional multimedia image-makers, the EOS-1D X Mark II is the flagship model within Canon's DSLR lineup, and is characterized by its robust processing capabilities and ability to enable a high-end multimedia workflow. At the heart of the imaging system is a full-frame 20.2MP CMOS sensor and dual DIGIC 6+ image processors, which contribute to fast continuous shooting rates up to 16 fps in live view, 14 fps with full-time AF and AE, and an expanded sensitivity range from ISO 50-409600. The sensor and processor combination also avails DCI 4K video recording at 60 fps and Full HD 1080p recording at 120 fps, along with the ability to record on-board to a CFast 2.0 memory card, or uncompressed Full HD video can be saved via HDMI to an optional external recorder. Benefitting stills shooting is an apt 61-point High Density Reticular AF II system, which includes 41 cross-type points for a high degree of precision in varying light conditions, and video shooting is enhanced by Dual Pixel CMOS AF, which makes its first appearance in a full-frame sensor for smooth, quick, and controllable AF in live view. With a versatile set of imaging traits, the Canon EOS-1D X Mark II takes its place as a high-performance tool for professional photographers and videographers alike.

Why should I buy from 4K4Less.com?
The founders of 4K4Less.com have been in the camera business for over 20 years. Carrying the top brands, 4K4Less.com is committed to providing customers with amazing deals on the highest quality equipment on the market.

What is 4K4Less.com's Shipping Policy?
At 4K4Less.com, almost all of our cameras, drones and accessories ship free. Not in United States? Not a problem, we can also ship to you!

Is your site secure?
Yes! We use the latest SSL technology to encode names, passwords, credit card numbers, and all other customer information, making it practically impossible for anyone to ever see your information.